Skip to content
What is your cat saying? What does it mean when your cat waves its tail? Wouldn’t it be great if you could talk to your cat and know what it was feeling? Well, by reading simple body language you can! By taking note of what the tail ears and fur on your cat is doing you can see how he or she is feeling, writes Gordon Bloomfield. 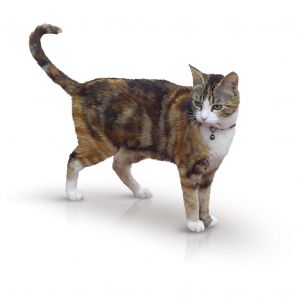 The tail is the most important part in determining the cat’s feelings. It shows many emotions and can help you decide if your cat is happy or not.

Straight up: When your cat comes toward you or another object with its tail straight up, it is showing friendliness, it is most likely a familiar person or object and it is it’s way of greeting in a friendly manner.

Straight up and quivering: This shows extreme happiness. Sometimes this will happen as you greet your cat. Be warned though, this can also denote that the cat is trying to ‘spray’ in order to scent mark territory!

Straight up with a hook: this is a questioning pose. Seen when approaching other cats or unfamiliar people or objects. The cat is prepared to be friendly but is ready to be defensive too.

Straight up and puffed up: A cat holding its tail straight up with it all puffed up is showing anger. It may have been startled, been in a fight or is in a compromising position. It is annoyed and may be aggressive although it is more likely just showing its displeasure.

Straight at a slight angle: if the cat holds its tail straight but only slightly upward, it is feeling unsure. It is prepared to be friendly but also prepared to run away or fight.

Straight at a slight angle, waving: Usually to denote amicable feeling, used if around familiar people objects and it is greeting but not directly or putting too much interest in the person or object. More like an acknowledgement.

Straight and down: A cat holding a tail straight and downward, with no movement is showing that it is ready to fight. It may display this to other cats, whilst hunting or toward people. Be warned, it’s ready to claw or bite. It could do this during play too, showing aggression toward the toy.

Up and then hanging down: If your cat is holding it’s tail slightly up at the base and then allowing it to hang down loosely it is showing defensive aggression. It is ready to defend itself although it would rather not have to. May be accompanied by a twitch.

Tucked: A cat holding its tail under or flat against its legs is showing submission. It could also be being fearful, but is more likely to run away unless cornered.

Wildly thrashing: If the cats tail is wildly thrashing it is showing an extreme emotion. Generally large, lazy swings of the tail show excitement whilst smaller more rapid swings show anger or irritation.

Gentle swinging: A tail gently and slowly swinging can sometimes mean contentment but careful consideration should be taken to how the cats ears are and where it is as it could also show mild irritation.

Ears also play an important part of showing cats emotions. Not as expressive as the tail, teamed with the movement of the tail it gives a wider picture into what your cat is thinking.

Ears back: If a cats ears are turned back it generally shows aggression. However if the cats ears are upright and back this is confident aggression and usually denotes a challenge. This may be seen during play or toward other rival cats. The more the ears become flattened back and down the more fearful of the situation the cat is, the only way it sees out of the situation is to act fearful or nervous aggressive. This may be seen when the cat is challenged or comes up against something it doesn’t know, like a person or a dog.

Ears out: If the ears are sticking out it shows extreme unhappiness or mild fear. The more the go back the more the cat is feeling threatened and the more likely it is to react aggressively.

Ears right back: Often with a hiss or open mouth this shows extreme fear and although the cat would rather run, it will fight if cornered.

There are some other behaviours cat show, which aren’t based in fear or aggression but in affection and excitement.

Vocalising: A quick purr or chirp from a cat accompanied by the right behaviour can be a friendly greeting. Sometimes your cat make growl or purr as you stroke him or her, to show contentment and affection.

Pressing with head or rubbing with face: This is a show of affection, they are transferring their scent to you to reinforce the bond between you and him or her. They are comfortable with you and content that you are there. May also be something they do as a greeting, to reassure you are still friends.

Rubbing around legs: For attention mainly, also to share scent, to reinforce the bond between you and your cat. An affectionate display, may also do to other cats and some other household members, such as dogs.

Whiskers: Whiskers forward or flexed shows curiosity or happiness. Whiskers back, shows fear when accompanied by other body language.