Throughout history cats have had an air of mystery surrounding them and the RSPCA hopes to debunk the nine most common myths.

The RSPCA has more cats in the charity’s care than any other animal and this year has taken in 20 per cent more than during the same period last year.

As we near Hallow’een we are getting to the bottom of some of the myths surrounding cats in the hope that it will help people to gain a better understanding of our feline friends and create more homes for the high numbers in animal centres. 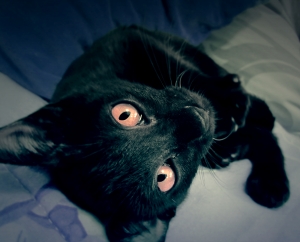 Whilst some myths about cats can be traced as far back as medieval times, others, for example, the old wives tale that should have a litter of kittens before being spayed or that cats pose a risk to pregnant women or babies are just modern day mythology and scare-mongering.

RSPCA scientific officer and cat welfare expert Alice Potter said: “Sadly, one of the most common reasons that people call the RSPCA about wanting to give up a cat for adoption is because they are expecting a new baby. How much of this stems from these misconceptions is not known, but the reality is that cats make great family pets.

“This, coupled with the belief that cats should have a litter of kittens before being spayed means that we have high numbers of unwanted cats in rescue centres.

“We would encourage anyone thinking of getting a cat to first look at adopting one of the ones in our care desperately looking for a home.”

Here are the most common myths around cats and the answers our experts have given to them to show that they are mostly no more than myths.

Not true. Black cats are just the same as every other cat! They won’t bring you bad luck, good luck, riches or hard times. More than 70 per cent of the cats in the RSPCA’s care are black or black and white, as this is the most common colour of cat – not because they are unlucky.

The RSPCA encourages anyone who is considering adopting a cat to base their decision on character rather than colour. To see the cats in the RSPCA’s care, please visit rspca.org.uk/findapet

This myth has come about because in some rare circumstances directly touching cat litter or cat faeces while pregnant then not washing hands afterwards then handling food can cause toxoplasmosis which is harmful to unborn children. This can also be caught from handling raw meat or digging in the garden. However, maintaining basic hygiene practices around cat litter is protection from this and there is no harm in petting or stroking your cat as normal. New mothers will naturally be protective of their babies and may worry that the cat could harm or suffocate them. While it is wise to introduce sensible precautions, e.g. not leaving a cat unsupervised with a baby until he or she can interact with the cat safely, there is no reason that cats can’t continue to be a member of the family.

According to an RSPCA study, more than a third of cat owners believe that a cat should have a litter of kittens before being spayed, but this simply isn’t true. A cat can get pregnant from as young as four months, while still a kitten herself. Vets and animal welfare charities recommend that cats should be spayed at four months to prevent accidental litters – the RSPCA’s study also found that 85% of litters of kittens are unplanned.

While some cat owners may suspect that their curious cats have escaped death by their poise and prowess in fact this is a common myth which has been around centuries – possibly even since Egyptian times. Typically cats live for fourteen years, but many live for much longer.

Milk is good for cats

Water is all cats ever need to drink once they have been weaned at eight to twelve weeks. Because they are unable to digest lactose giving cats milk can be harmful and can cause nasty stomach cramps and diarrhoea.. Cats should have constant access to fresh drinking water.

There is some truth in this. Some cats will like their home comforts and if they have always lived indoors only they may adapt to living without outdoor access. However cats that are used to going outside may find adapting more difficult.Many cats enjoy spending time outdoors roaming around, climbing, running and lying in the sunshine! Some indoor environments can become predictable and boring, leading to stress, inactivity and obesity. The RSPCA wouldn’t recommend keeping cats that are used to going outside, as ‘indoor-only cats’, except for health reasons.

Cats purr only when happy

Cat lovers enjoy hearing the sound of their cats purr as it is associated with contentment but actually a cat’s purr is more complex than that and can show a variety of emotions including stress. The sound is made after signals in the brain cause muscles in the voice box to vibrate.

Cats always land on their feet

As an active and tree-climbing animal a cat’s survival depends on its ability to survive falls. Cats have a flexible spine and no collarbone allowing them to use their hind legs to right themselves during a fall.

Typically most cats are most active at dusk or dawn – technically this is known as crepuscular – as in the wild this is when prey is most active.