Aggression in any pet is an unwanted problem, particularly so in cats. These usually placid, affectionate animals can be known to become aggressive, and as Britain’s most loved pet it is essential that today’s cat owners know how to deal with feline aggression. This resource aims to highlight the reasons behind feline aggression and what can be done to help. 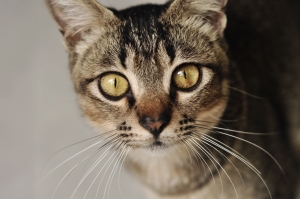 There are many causes of aggression in cats, some are quite obvious and others are less clear. Aggression patterns are common in all animals, and some times these are desirable. For example, a well trained, well controlled guard dog whose owner knows how to harness aggression is invaluable. But an aggressive pet cat would serve no purpose. It would have the added disadvantage of the cat not appearing aggressive and would subsequently give the illusion of being a non-threatening animal, whereas an aggressive cat can be quite dangerous.

The most common cause of feline aggression is fear or defence. Cats are natural predators and as such they have certain natural instincts. If a cat feels threatened or scared she will defend herself. There are usually signs that a cat feels threatened, and these are quite easy to detect. If a cat begins to hiss, it is a sign that you should back away. Body language speaks volumes, if she crouches, with her down and her tail twitching, take this as a sign to step back.

Stepping back is the only way to defuse a potentially nasty situation, but be sure not to let your cat think she can get the better of you through aggression, this will only lead to further problems. Such problems could include, further aggression, a weakened bond between cat and owner or even an injury caused to a person by an aggressive cat.

Another cause of such behaviour is redirection of aggression. This can be caused by the cat becoming distressed by something, perhaps another cat in the garden, or a startling noise, and she will vent her aggression to the nearest possible thing, you.These situations can be controlled. A course of behaviour modification can help the cat not to become so easily stressed by things and as a result reduces the amount of redirected aggression. She also needs to learn that any type of aggressive behaviour is inappropriate.

This can be achieved by correction when necessary. An effective way of correcting her if she becomes too bolshy is to rattle a tin of pennies close to her head or by stunning her with a short, sharp jet of water. Never strike or shake the cat. This will only result in increased aggressive behaviour and she will begin to become fearful of her owner.

Playful aggression is common amongst most intelligent animals, as it is central to the development of essential skills for survival. This is fun to watch and it is rare that it becomes a problem. However, she needs to be completely aware that any aggression directed towards you is unacceptable. She needs to be able to distinguish between play and real situations.

A cat may become aggressive if she is irritated. You will learn to cope with this as you learn the limitations of your cat. If something irritates her, don’t do it. And if you do, don’t blame her if she scratches your eyes out. Some cats become irritated by being petted for too long. This is because they are such independent creatures they get uncomfortable with constant human contact. This can be modified by gradually spending more time with her and rewarding her calmness. It has been said that cats can become irritated out of the blue.

Signs to watch for when you are petting her include, her becoming restless, her tail beginning to twitch, her ears flicking and her head moving closely towards yours.

Any sudden change in your cat’s behaviour should be referred to your vet. Aggression can be caused be physical maladies as well as mental problems.