The RSPCA is reminding pet owners of the dangers of fleas following the sad death of four three-week old kittens in London.

Whilst fleas may seem a temporary nuisance, they must be tackled quickly. As well as being very uncomfortable for your pet they can pose serious and even fatal risks to their health. 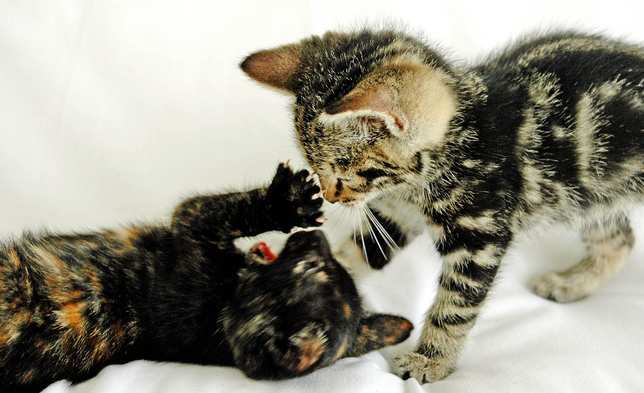 The reminder from the national charity follows the tragic death of four stray kittens who were swarming with the parasites and sadly died.

The mother cat, Minnie, was found in a garden in Crouch End in November along with her four black kittens, now named Eenie, Meenie, Mynie and Mo. The two males and two females were approximately two to three weeks old.

Colette Jenson, Branch Operations Manager for Central & North East London RSPCA, said: “This was such a sad story. The first two kittens died soon after arriving at Harmsworth, and the other two seemed to be responding well but unfortunately then took a turn for the worse. They both died within three days of each other which was very upsetting.

“The numbers of fleas is likely to be the result of recent bouts of warmer weather and the slow start to winter. Over the summer months flea numbers build up in the environment where feral and stray cats sleep, and then usually these numbers tend to reduce when the cold weather sets in.”

Nathalie Dowgray, from the RVC said: “On one of these little kittens we found over 50 fleas, even after treating them quickly and starting them on supportive care we sadly were not able to save them. The red cell counts on these 300gm kittens were below 10% (normal for a kitten is over 30%) and they didn’t have the strength to recover and start making new red blood cells. This number of fleas was drinking nearly 1/2 a ml of blood every day which doesn’t sound a lot until you consider that little kittens this size only have 15ml of circulating blood in total.”

She added: “This situation goes to show the importance of treating fleas in our owned cats and also the importance of the work the RSPCA is doing in helping the stray and feral cat population of London. Stopping kittens from being born into these conditions is a priority.”

The RSPCA is also reminding cat owners to never use dog flea products on their kitten or cat, as it can be fatal. Dog flea products contain the insecticide permethrin, which is highly toxic to cats. Always carefully check the packaging of any flea treatment you use.

There are many different flea products available and some may be more effective at killing fleas than others. The RSPCA would always advise owners to seek advice from their vet as to which flea treatment is safe and most effective for their pet. Flea collars are available however some of these are not very effective and should never be used unless they have a quick-release buckle due to the risk of injury.