Pet owners are asked to be cautious after five cats have died from antifreeze poisoning in Rotherham, South Yorkshire.

The cats all came from the same area around Elliott Drive in the Kimberworth Park area and there are fears the number of poisoned cats could be higher with owners not realising antifreeze is to blame for their pets illness. 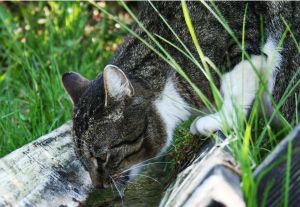 Although it is not known where the antifreeze came from owners are asked to keep an eye on their pets and for the public to ensure any antifreeze is securely stored so cats cannot access it.

RSPCA Inspector Jennie Ronksley said: ‘We would like to ask everyone in the area to keep an eye on their cats’ wellbeing.

“People should be aware that antifreeze is extremely poisonous to their pets and just a small amount can lead to kidney failure and death.

“Vet tests determined all these cats died from ingesting antifreeze – but we do not know where the source of it is.

“At this stage we do not know if this is an accidental incident or deliberate but in the meantime we would ask for everyone in the area to check where they keep their anti-freeze and make sure it is secure and out of the way of cats.

“People should check their cars for any leaks too.

“It is possible that people were simply unaware of the potential hazards to cats when they poured the antifreeze away.

“Similarly we cannot rule out that this was a deliberate act of cruelty and would ask anyone who has information to this effect to contact us immediately.’

Signs of antifreeze poisoning can be seen anything from 30 minutes after a cat has ingested the chemical, though it can be two or three days before signs of kidney failure are seen.

Symptoms of Anti-Freeze Poisoning in Cat

The signs of antifreeze poisoning can include one, or several of the following:

If you suspect that your cat has been poisoned you must take it to a vet immediately. If possible, you should take a sample of what the cat has eaten/drunk, or the container.

Poisoning a cat deliberately is a criminal offence. Under the Animal Welfare Act 2006, the maximum penalty for those found guilty of this offence is up to six months imprisonment and/or a fine of up to £20,000.