When a kitten is born, it is hard to believe that one of these helpless little pink things will become a graceful and powerful hunter. However, within a year, that tiny kitten will be a mature cat. Since kittens are born blind and are completely dependent on their mothers, it is no surprise that their first stage involves little more than eating and growing. 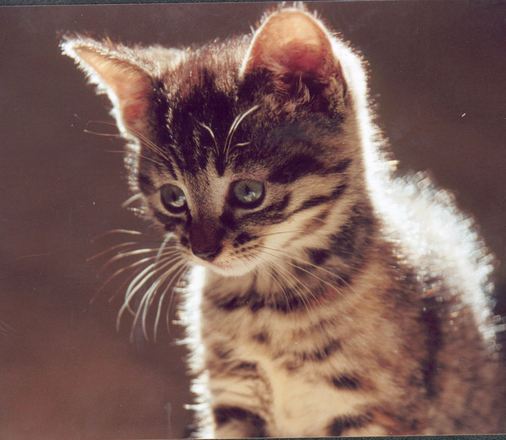 However, once your kitten’s eyes open, he will begin to explore the world around him. By the time he is four weeks old, he will be romping shakily about with his siblings. He can begin to learn to use the litter box and should start to become socialized. In the wild, a kitten’s mother will start to supplement his diet with dead mice or other small prey.

You may prefer to give him some soft kitten food or some dry food softened in water. By the time your kitten is six to eight weeks old, he is ready to begin exploring a bit further from home. If he is indoors, he will venture into other rooms, while a feral kitten will begin to follow his mother when she goes to hang out with the rest of the local cat colony.

While the kitten’s mother may still bring him mice, they are no longer already dead. The kitten begins to develop his hunting abilities. Eight week old kittens are usually completely weaned and ready to go to a new home. Over the next several months, kittens will continue to grow fairly quickly.

They need to receive a series of vaccinations so that they stay strong and healthy. They will begin to learn how to coexist with their families and will learn which behaviors are allowed. Your kitten should learn his name and a few simple commands.

Also, if you have a long haired cat, it is important to get him used to the grooming process now, even if he doesn’t actually have a coat that needs to be brushed yet. Has your sweet little kitten suddenly developed a bad attitude? Cats go through an adolescent stage to transition from being a kitten to being a mature cat, just as human children do.

This stage usually begins at around five to six months and may last until your cat reaches his first year. He will still be very playful, but may occasionally get carried away and play too aggressively. If you do not neuter your cat at six months of age, he will actually be mature enough to reproduce. Neutering your cat will help him get through this stage much more smoothly. At six months of age, your cat will look pretty much like he will look as an adult.

However, he will fill out and bulk up as he continues to mature. Of course, once he is an adult, your cat will go through additional stages, such as middle age, just as humans do. The good news is that you won’t have to worry that little Fluffy will run out and buy a sports car if he has a bit of a mid-life crisis.